I have to admit, I was stumped.

While “’Merica … F’ Yeah!  HOLY CRAP America its food, booze, anger and food — deep fried thoughts from Baltimore” blew away my previous best days here (I hate Valentine’s Day” and the always popular “naked in a mixed gender German sauna”) people were asking for the upstate New York update.   There were emails and a few personal requests.

So basically seven of you read it … each of you will recieve your $10 check as promised.

I tried, honestly I tried.  Back home here Germany safe and sound in my own house, in my own bed I thought and I thought.  But really what the hell is funny about upstate New York?

That the lady at the diner near my Dad’s girl friend’s house called me honey while refilling my coffee that was sort of funny.   My Dad’s girl friend’s daughter Darcy DiBaise puts on an awesome dinner party (better than Dagmar and I ever could), that’s not funny.  She’s pretty funny and her five year old daughter Mia throws a mean left hook but the situation isn’t funny.

Everyone makes really good home cooked food, not funny.  Everyone is super nice, also not funny.

Everyone is FUCKING nice.   Aunts, uncles, cousins, spouses of cousins (cousins-in-law?) are all nice and further everyone is a lawyer, doctor or about to be elected president.  Shit what’s funny about that?  Also please don’t sue me.

If there's ever a job for driving tractors up and down hills, I'm your man

My dad likes tractors, so much so that he bought one.   Well its farm country so what’s so funny about the fact that he bought, restored and uses a tractor in his retirement to plow snow, mow brush and tinker?

It wasn’t a funny ride. 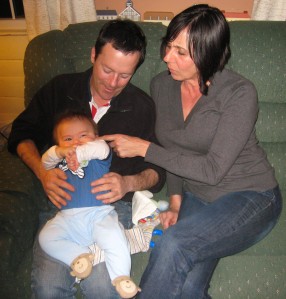 8-month-olds sit still for no camera, they're rebels like that.

To top it off I had a great time , I met my nephew for the first time Edward Oliver and Dagmar immediately set off to kill Diane’s dog with rigorous death marches because she hates animals.

Maybe there’s a cow joke in here somewhere but Gary Larson I ain’t.

So basically I was stuck. Until yesterday when Dagmar came home from the gym and showed me this clip from the Today Show.

Please take the next six minutes and watch this clip.   I’m willing to risk your going away and not coming back because that clip is just the bizarre.

Okay, did you watch it?   If you’re at all like me right about now you’re thinking about suicide, gouging your eyes out our becoming Amish.   Basically, anything that will prevent that kind of news from entering your brain ever again you’re in favor of … amiright?

At about 1 minute in we get to look into Becky’s charming idea of fun freaking out older people with her fake baby.    Becky you’re going to give one of those women a heart attack with those shenanigans so knock it the hell off!    Also Becky I seriously suspect you should have your IQ tested and I’m fearful that you vote.    We know, that you know, it’s a doll and that makes it just that much fucking retarded.

Then there’s Dori and Gary, who have their own goddamn real-life kids and grandkids by the way.   Gary.  Gary, Gary, Gary … Jesus man what happened to you?   You still have that penis right?   I mean okay I get it, she’s your wife and it’s worth it to you not to bitch about the dolls but don’t let her drag you to the convention for Christ’s sake.  What were you thinking sir?

Let’s take this quote from Fran Sullivan, who is SIXTY FUCKING TWO by the way.

“Children talk to their dolls, and they express their feelings toward their dolls,” she told Lauer. “And as a 40- or 50- or 60-year-old woman, you do the same thing. You’re still the same person you were when you were an 8-year-old.”

Maybe you’re the same person you were when you were 8 Fran?   Mentally it seems very likely you are the same as an 8-year-old but 60 year olds DO NOT TALK TO DOLLS AS IF THEY WERE REAL PEOPLE.   Fuck what’s next, a little show and tell with bobby in the janitor’s closet.

Did you catch old Becky and Karen about four minutes into the story?

Not to call into question Ann’s professionalism but I think she missed a few questions.   Questions such as, this is all big joke to get on TV right?   Are both of you fucking kidding me?   Who let you into our studio?  I bet Katie Fucking Couric doesn’t have to do stupid shit like this and Are you all just really mad at your husbands and using these dolls as some sort of revenge?

When I first saw this I assumed it was an April Fools’ joke.  I was secretly hoping Mall Lauer would run in at the end of the segment and violently slay the dolls with a chainsaw or that Ann would, mid interview, reach over grab a doll and bite its head off.

That, obviously and sadly, didn’t happen.