Why did I buy that song and why is the Showtime series Californication still pissing me off?

Well, as you might recall from the “10,000 hit’s, holy crap where’s my music” update a few weeks back, Steve Jobs literally engineered things so that all my iTunes purchased music would be robbed from me at about the time I did that update.

No idea why he chose then, he just did.

Now some of you apple savvy folks I can only assume read what I wrote back then and laughed your faces off, cause you realized I’m an idiot.   Some of the emails you sent me were uncalled for though, why bring my mom into it!

Some of you less savvy folks signed and thought, well that sucks.

But as a public service I will now tell you how to restore ALL your purchases on iTunes.

Literally every purchase you ever made on iTunes.  You’re welcome, I’d do anything for you.

Of all the steps I recommend step one above the others because as it turns out apple DOES have an “I fucked up button”.   They just don’t call it the “I fucked up” button, oddly.

Now when faced with years and years of drunken iTunes purchases I’m realizing that my ‘HOLY SHIT WHAT IS THAT SONG’ desire to ‘BUY IT NOW’, even at .99 cents, when added together is the GDP of Guatemala.

Actually I just did the real math, even if every song literally cost .99 cents (and they don’t cause albums are less, I think) it’s only like $239 or so and hell I’ve been buying crap off of iTunes since at least 2007 or so.

But the list is funny to look at it.  The first iTunes purchase for reasons that prove I’m still 16 and cry at night because I’m a special sensitive flower, or something, was The Cure.   I literally haven’t listened to the Cure for more than five minutes in a row since 1993.

That was a purchase made while drinking.

The next few iTunes purchases are pretty boring, Spoon cause I like them and the CD was scratched beyond use (they make crappy beer coasters) and a few others that yeah, I’d totally see me buying that sober.

Then there’s a weird purchase by something called ‘Teagan and Sara” which I’m listening to now and it’s not bad.   But have NO memory of buying it.

Honey look I have an apple AND a snake, take me back PLEASE

Here’s a good one, guaranteed to have been a purchase made after many beers.   The entire soundtrack to season one of the Showtime series, “Californication”.    You remember that show right?  It’s the one where agent Mulder solves alien crimes and whores his way through a series of totally hot LA chicks in an effort to, well, win back his ex-wife.

Basically this was the show’s entire theme …

Honey, I banged a hot blonde, will you take me back now?

Well I banged a hot chick with tattoos, will you take me back now?

Look I just banged two totally hot brunettes, at the same time, will you take me back now?

No?  Look you’re being unreasonable here.

Look the series had a lot of hot naked chicks in it, like in every scene and my wife was deployed.  You do the math.

What killed that series for me (besides that fact that I want to retroactively abort the person that wrote in the daughter) is the scene in season two where he goes down on the wrong woman in a dark room during a party.   Look, take it from me there is no <deleted — legal dept.   See me! – Ed.> and that’s how I know that scene was a bunch of crap.

Shit where was I?

Oh yeah.  Californication, umm season one good, season two bad.  Also purchasing the soundtrack put like a crap ton of artists I don’t know, all of whom have one song listed, into my selection of artist lists on my iPhone.

Fuck you Mulder you asshole, alien encounter that.

I guarantee I was reading SOMETHING by Hunter S. Thompson when I purchased this next song, and NO it didn’t have to be (but likely was) Fear and 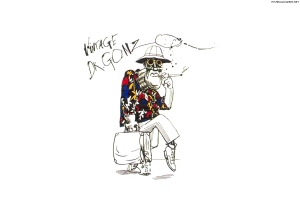 I was digging Ralph Steadman before most people knew who Johnny Depp was. I even had a this on a Tee (and still do) in like 1994

Loathing in Las Vegas.   That song was, White Rabbit by Jefferson Airplane.  And no matter how tanked I was when I bought that song, I stand behind it because the dormouse said damn it, that’s why.

Here’s one I cannot explain and I fall on my sword begging your forgiveness.  I don’t have a clue why I bought California Girls by Katy Perry, I just did.   I should have to give everyone that just read that a .99 cent refund.

But holy shit the Pogues, I missed the Pogues, and then I played them and I wondered if I could just make iTunes forget that little mistake?   The Pogues are okay, I’ve listened to them (sometimes A LOT) but the burn out on the Pogues hasn’t expired yet, back into the vault you go angry drunk Irishmen, you haven’t served your time yet.

I have no clue who the street dogs are, why I would pay money to down load them or even what they sound like.   Chances are I heard one song, liked it and bought the album.  They’re in the download queue and are expected to be next in the year 2044.

Seems I had a ‘rap’ phase.  I did.  In between Skyrim, Star Trek conventions and … Okay I like some Jay-Z.  Screw you he’s cool.

While everyone, sadly including myself, was flogging their penis (peni?) about what a genius Kurt Corbain was Sublime’s, with Bradley Nowell, was doing awesome stuff.    Bradley Nowell died chasing the dragon, I always thought it was a car crash – but you know you learn things here at had a few beers, it was the smack– , and I’m still convinced he was under rated by everyone.   Had they not broke up after his death I think they would have been as influential as the Pixies are thought to be today.  The surviving members I now know, from writing this, have released a new album.

I’m checking it out.

There’s a lot of comedy, which is awesome.

At the age of 14 learning all the dirty words, and HOW to use them, is awesome.

At about the age of about 12 or something I was watching HBO late at night, which was verboten.    But my parents slept well and if I was quiet and had the volume down low, they’d never know.   Then George Carlin came on, and I couldn’t help myself.  I was holding my sides on the couch in the living room laughing.   Mom of course woke up and instead of beating my ass, like I deserved, she sat on the couch with me and laughed a few times, Carlin wasn’t her thing but she appreciated the fun I was having with it.

It’s been a life-long love affair.  I was heart broke when Bobcat Goldthwait took his fatal, fire induced, career suicide on a late night show.   Oddly he was on NPR’s Wait, wait don’t tell me last week and is still just as funny.

Back to music, there’s a lot of ‘Clash’, good.  A lot of’ Buzzcocks’ which don’t suck and a shit-ton of Dave ‘god I’m so over that’ Matthews.

I’m not at all sure why Sugar’s “that’s a good idea” keeps popping up on every device I own but I can only assume it’s because I want to kill my wife or I just like the song.

Whichever, I’m cool with both.

And who the fuck are the Tune-yards?   Oh yeah that was that band I heard on NPR, what the fuck was I thinking buying that album.

Back to comedy, Jeanne Robertson should be held down while I poo … okay she’s kind of funny.  My mom would have liked her and dad would approve.

Rated G comedy, I have ONE thing they would approve of …

Vampire weekend is there and if I didn’t like boobs so much even I would assume I was gay.

When the fuck did I find “Bowling for soup” that great band of suck, to be a great band of non-suck?  They had like two maybe three songs that didn’t suck.   Three albums Todd, what the fuck?

I also have a lot of before mentioned pixies, wait for it, tribute bands.

But no Pixies.  Fuck.

What the hell?  Most of the tribute bands are better than the original Pixies but not as good as the original Pixies, if that makes sense.  Back when I started this, a shocking and ancient 6 months ago, my first update was (going to be) about how the Pixies were a really influential band and I could back that up if research wasn’t hard.  Research IS hard let me tell you, trust me the Pixies were influential, to me at least.